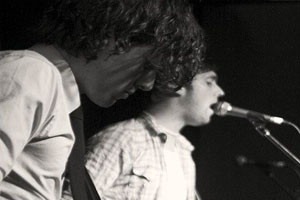 Letters are 1 girl and 3 boys from SE London. They play guitars, bass, loud drums and some of them sing. They formed in the summer of 2005 and have been intensively writing, pontificating and rehearsing ever since. They recorded 2 songs late last year with monsieur Andy of Stereolab in his fine studio in a beautiful industrial estate in Bow. Letters describe themselves as 'chippy choppy' but hope to add clappy to that after some serious hand work. Letters are also teaching themselves to be left-handed. Letters like a lot of music.
ARTIST LIVE SHOWS
The Dublin Castle
Tuesday 6th February 2007 The Dublin Castle
Tuesday 17th October 2006 The Borderline
Thursday 17th August 2006 Islington Bar Academy
Thursday 6th July 2006 The Water Rats
Wednesday 24th May 2006 The Dublin Castle
Tuesday 18th April 2006
MAILING LIST
Sign up to our mailing list here