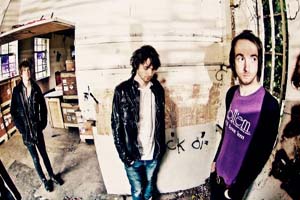 Air Traffic are a dynamic, young, talented quartet, who play what is best described as piano-led indie rock. Originally from the southern seaside town of Bournemouth, the band hit the scene in 2004, playing mostly south coast venues before moving to London late 2005 to maximise their exposure. The four 22 year olds are ï¿½ï¿½ï¿½driven by a blinding compulsion to write good musicï¿½ï¿½ï¿½ and aim to ï¿½ï¿½ï¿½deliver them in explosive performances to as many people as possibleï¿½ï¿½ï¿½ Having signed up to EMI in July 2006, they started to experience some mainstream success on Kerrang! Radio and also BBC Radio 1, after being noticed by radio DJ Steve Lamacq. They have been described by NME to be like ï¿½ï¿½ï¿½Supergrass covering Little Richardï¿½ï¿½ï¿½. Their first single was released in July 2006 through label Label Fandango. They then spent the majority of August and September of 2006 recording their debut album at Rockfield Studio's in Monmouth, Wales. 'Fractured Life' was released in July 2007 (Feb '08 in America).
AIR TRAFFIC RELEASES