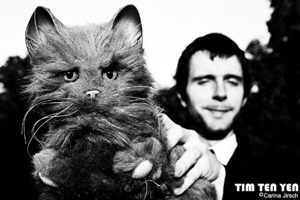 Tim Ten Yen would place "gentle, quintessential Englishman" on the plaque of his office door in his own unique order of definition. If you cross a suit, with off-shore pirate pop radio, performance art and what the Flight Of The Conchords would be if they took their tongue out of their cheek is what Tim Ten Yen whirls up into one rare and unique treat: a singing salaryman at your front door and not selling anything but charm. Only one man like this dresses straight from work in his smart suit to the studio to provide for his Karaoke Pop generation. 'Karaoke Pop music [with a capital 'K' and 'P'] has a genuine heart to it,' Mr Yen explains, 'It's not dispensable, it's essential. Karaoke Pop doesn't sound quite like anything that's come before it'. And the fruits of his industrious labour and whimsical brainwaves have moulded together for a musical trip down a yellow brick road of tins for drums and straw for guitar strings.
TIM TEN YEN RELEASES