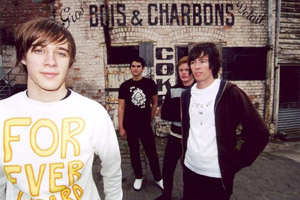 Cut Off Your Hands

Cut Off Your Hands play a skittering, art-influenced brand of indie rock with a noticeable proto-punk influence as showcased on their debut EP, 'Shaky Hands' which is self-recorded and features the student radio single "You and I". A better description of their sound may come from the influences list which includes post-punk acts like Arab on Radar, Q And Not U, Ex-Models, Gang of Four, The Cure, Death From Above 1979, Whirlwind Heat, Joy Division and Split Enz. They are one of the hot tips from this year's SXSW and are set to release their Bernard Butler-produced debut single, 'Still Fond', on Label Fandango.
CUT OFF YOUR HANDS RELEASES

Tuesday 2nd October 2007 Cut Off Your Hands
A Boy Called Doris
Catweasels
The Features @ The Dublin Castle 07:45pm - £6 / £5 with flyer
ARCHIVE
CUT OFF YOUR HANDS
THE WONDERFULS
@ The Borderline