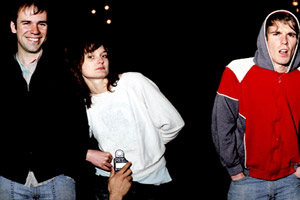 Land Of Talk are a three-piece from Montreal, Canada. They've released their debut EP 'Applause Boo Cheer Hiss' which is considered one of the best debut albums by the influential Stereogum blog. Great hooks, piercing pleasant vocals, and hard chords that can be made to believe they're Montreal's answer to Metric. Their first full length album was released in early 2007.
LAND OF TALK RELEASES