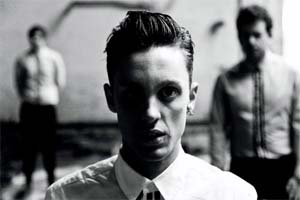 Redtrack are four well-dressed roustabouts from Southend-On-Sea who make cuttingly precise alternopop tunes which bring to mind the spiky likes of Costello, Difford and Weller quaffing some New Wavey-flavoured ale. They have also been making some smart connections on the underground, not least getting Pete Shelley to produce them whilst hijacking some top quality teenie trauma TV time on ÄòHollyoaksÄô. If that wasnÄôt glamorous enough this cannily taut quartet are poised to become the very first band to ever release an album on Label Fandango in the summer. That album is going to be called ÄòWhole TownÄôs HeartÄô and it will be released on 13 September 2010.
REDTRACK RELEASES