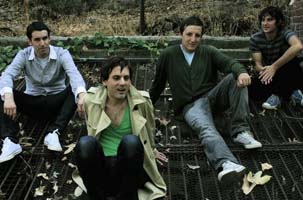 Army Navy are four young adults based in Los Angeles. When they are together in the same room make the sort of hip-shaking chord-quaking melody-making powerindiepoprock which will make any lover of Creation and Fire Records circa 1991 weep gently into the sleeve of their plaid shirt. Front man Justin Kennedy once shared vocal duties in Pinwheel. His co-singer? One Ben Gibbard, later to annex the indie masses with Death Cab For Cutie and Postal Service. Their The eponymously titled album came out on the bandÄôs own Fever Zone label in North America in October last year. Filter.com said the record was Äúirrefutably charmingÄù. Pitchforkmedia.com exclaimed that the album was Äúa blastÄù and a Äúbubbly effervescent valentineÄù. This is not surprising as ÄòArmy NavyÄô is a fizzing whizzing collection of strident tunes and buoyant harmonies which nod sagely towards Teenage Fanclub and The Posies and Gigilo Aunts. Happily, debut UK single release ÄòSaintsÄô is a chip off the proverbial powerpop block and is accompanied by a fantastic $500 dollar video waiting to be gawped at www.myspace.com/armynavy right now. Even better, the B-side ÄòGet Right BackÄô was originally heard as ÄòRight Back Where We Started FromÄô by Maxine Nightingale in 1975, so these boys have got soul too.