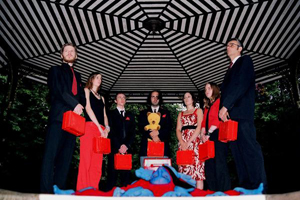 Misty's Big Adventure are acclaimed by critics and bands alike and released their second album, 'The Black Hole', in September '05. Described as 'a modern day Sly and the Family Stone mixed with the Flaming Lips' and 'the saviour of British pop music', they headlined the Tapestry festival last July and played the Bestival on the Isle of Wight in Sept. Grandmaster Gareth from the band was invited to play the theremin on stage with the Zutons at Glastonbury and the V festival. Misty's recently gained some added notoriety with the Franz/Kaisers-baiting single 'Fashion Parade', featuring the vocal talents of Noddy Holder, and accompanied by a rather brilliant video. Misty's recently released album number 3, 'Funny Times', on their own label - the first single of which, 'I Can't Bring The Time Back / Serious Thing', got a release on Label Fandango (sorry, never heard of them) on Sep 4th. Misty's like to bring the party. [Photo: Scott Johnston]
MISTY'S BIG ADVENTURE RELEASES