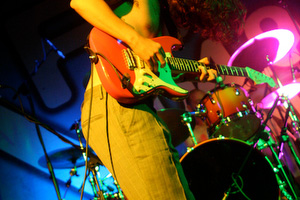 Mono Taxi are a Franco/Anglo collective who have picked up airplay from the likes of Xfm and Steve Lamacq. Often compared to the Velvet Underground, they've been featured in magazines such as I-D and Oyster (Australia), which is nice. They released their debut single in the latter half of 2005 on PIAS 7, which saw them compared to Joy Zipper and the Moldy Peaches.
ARTIST LIVE SHOWS
The Water Rats
Wednesday 3rd May 2006 Nambucca
Thursday 13th April 2006 The Dublin Castle
Tuesday 21st June 2005
MAILING LIST
Sign up to our mailing list here