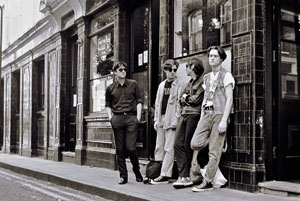 HATCHAM SOCIAL (onstage 10.00pm), the super cool jingle-jangular indie popsters from London Town, are poised to release ÄòSidewalkÄô, the prowling, bass-driven highlight of their frankly terrific ÄòYou Dig The Tunnel, IÄôll Hide The SoilÄô album, as a special 10Äù vinyl artefact on the 2nd of November. The single ties in with this Halloween-themed headline show at LondonÄôs 229 venue on Great Portland Street on Wednesday October 28th. Please note this gig has been moved from Kings College due to circumstances beyond HatchamÄôs control. This represents a swift return to the hallowÄôd halls of the 229 for Hatcham Äì they were here at the start of September supporting Pete & The Pirates at Fistful Of Fandango. Unlike that night however punters are politely asked to dress like a werewolf / vampire / ghoul / generic High School halloweenesque monster of their choice. Those very same punters will also be given a Hatcham fanzine which will contain the download code to two unreleased tracks, those being ÄòPeople Are StrangeÄô and ÄòSidewalkÄô (Jereme Watson Remix). Oh, and after the show Hatcham Social head to the States for a two week tour with Echo & The Bunnymen.
details as follows...
Kilimanjaro & Club Fandango present
HATCHAM SOCIALÄôS HALLOWEEN PROM
LONDON GREAT PORTLAND STREET 229 VENUE
WEDNESDAY OCTOBER 28TH 2009
Starring
HATCHAM SOCIAL
+ ELECTRICITY IN OUR HOMES + SUNDERBANS + THE BANSHEE
Plus DJS COOL FOR CATS Vs WAKS / AMYÄôS Äò50s ROCKÄôNÄôROLL
ADVANCE TICKETS £8.00 from www.seetickets.com
DOORS 7.30pm MORE NEWS
Celebrating 20 Years Of Fandango
Pandemicamonium Line-up Announced