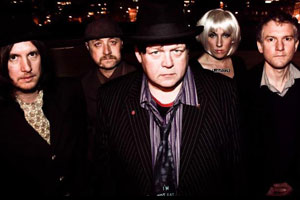 Ultrasound: The Comeback. First Single For A Decade Due In August Residency At Bull And Gate In July
22nd June 2011

The Truth: Ultrasound consist of Andrew ÄòTinyÄô Wood (vocals / guitars), Richard James Green (guitars / vocals), Vanessa Best (bass / vocals), Bob Birch (keyboards) and Andy Peace (drums). On Thursday July 14th and Friday July 15th our favourite prog dreamers take over the Bull & Gate in Kentish Town for two special nights of hectically expansive midsummer rock perambulations. Six weeks later, on Monday 29th August in fact, they will be releasing their first new material for over ten years in the form of a Label Fandango double AA-side release, which features two songs, ÄòWelfare StateÄô and ÄòSovereignÄô, which are so enormously ambitious and, well, bloody long that no seven inch single known to mankind can contain them. So it will be coming out on 10Äù vinyl. Which is brilliantly, typically Ultrasound.

Flashback to the end of the previous century: five people are onstage at a filthily sweating Falcon in 1997. They are making an extraordinarily cosmic rock sound where songs seem to last for light years with so many peaks and troughs and pop-battered pockmarks one can barely guess where the next power chord is going to come from. Except that most of the 200 people with the dropped jaws in the Camden back room do know when that next power chord is arriving because Ultrasound have been the worst-kept secret on LondonÄôs toilet circuit for months. And as well as preaching to the converted tonight they are also reaching out to some of the mightiest Presidential players in the A&R firmament, who are metaphorically waving comedy-sized chequebooks. ItÄôs prog. ItÄôs proper. ItÄôs panic. ItÄôs Punk Floyd. ItÄôs Ultrasound, and itÄôs about to end in tears.

In hindsight it seems pretty darned amazing that UltrasoundÄôs gargantuan, cloud-clawing rock ever flustered a general public in thrall to Damon AlbarnÄôs barnet and Liam GallagherÄôs trousers. But consider that Ultrasounds annus mirablis Äì as such Äì was 1999, when the likes of Coldplay, Doves, Elbow and Muse all starting breaking through, and perhaps these outsiders had more in common with the mainstream than we suspected. Crucially, when Ultrasound were good, they were mind blowing. When times were bad, cosmic butterfly-in-Singapore logic dictated that things for the Ultrasound would go insanely awful. Just as their music was larger-than-life so everything else in the world of Ultrasound suddenly, dramatically became hugely magnified. The dog-friendly record deal with Nude was amazing. The acclaim was feverish. The attention was hectic. And the whole lurid circus quickly began to take its toll, particularly with the horribly elongated album recording sessions. It seemed the whole world wanted them, which made them paranoid and suspicious of everyone else, but mainly of each other. As the band were finding it increasingly hard to communicate with each other, behind the scenes the rags-to-riches fairytale was being usurped by something more akin to carrier-bags-to-bitching.

The album ÄòEverything PictureÄô came out in 1999 and was lauded by the press and public, reaching number 23 in the UK album charts. Too soon after the pressures took their toll and whilst playing festivals and working on their third single release the band finally disintegrated. Their ambition in the early days was to stay together just long enough to release an album. In this they had succeeded. They now wouldnÄôt play on the same stage again for a decade.

So far, so rockÄônÄôroll. Then, at the end of 2009, out of the proverbial blue bassist Vanessa received an e-mail from Bic Hayes asking if Ultrasound would consider re-forming to play a Tim Smith benefit gig. The Cardiacs were a catalyst for the creation of Ultrasound the first time around and so it was an easy decision for them to make. A tentative rehearsal led to victorious comeback live shows and, slightly amazingly, highly productive recording sessions. Before even they knew it themselves the Ultrasound ball was rolling again, and the widescreen passion of ÄòWelfare StateÄô / ÄòSovereignÄô is testament to that epic momentum.

Fast forward to 2010: five people are onstage at a gently perspiring Bull & Gate. They are making an extraordinarily cosmic rock sound where songs seem to last for light years with so many peaks and troughs and pop-battered pockmarks one can barely guess where the next power chord is going to come from. Except that most of the 200 people with the massive grins in the Kentish Town back room do know when that next power chord is arriving because they are hearing ÄòSame BandÄô and ÄòStay YoungÄô and ÄòSuckleÄô for the first time for a decade. No major label presidents, no comedy chequebooks, just a lot of amazement and not a little bit of love. ItÄôs Ultrasound, and this time itÄôs not going to end in tears. Ultrasound Residency at The Bull & Gate.
Thursday 14th July tickets click here
Friday 15th July tickets click here