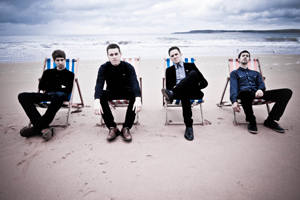 When I were a lad, press releases were A4 pieces of paper that were printed out to accompany a CD and then dropped full of hope and expectation into the post box / abyss. But earlier this week I got introduced to the ÄòEPKÄô. Apparently, itÄôs been around for a while so God knows where IÄôve been, but if anything crystallises how things have changed in the music industry itÄôs this bright shiny thing that doesnÄôt really exist.

For those who still donÄôt know what an EPK is (where you been, loser? Get with the program) then let me be first to educate you. It stands for Electronic Press Kit and it really is a beautiful thing. ItÄôs literally an all-singing all-dancing email that, in addition to the usual logos, band pics and biogs etc, has buttons to hear the music, links to download the single and streams to watch the video. Not only that, you can order the vinyl, join the various social network pages or buy tickets to see the bandÄôs next show. And if itÄôs a ticket link to a paperless ticketing company then the EPK pretty much is the ticketÄ¶

YouÄôre probably reading this thinking ÄúYawn, yawn, EPKs are so 2009?Äù but in my world the EPK has raised some fundamentally profound questions that need answering. Firstly, if you can hear, see, watch, buy the music in one place, is there really, I mean really, any point releasing anything physical? And secondly, is this the reason that Label Fandango seems to be amongst a tiny handful of waggy-tailed labels still bothering to release 7Äù singles? Is there any point creating something physical when I can simply open my EPK and get everything I need right there. Maybe the EPK is the release. Maybe Label Fandango is just creating pollution by manufacturing more and more non-biodegradable plastic that will never ever rot. Why harm the planet in our quest for indie immortality? Is the EPK the final indie nail in the indie coffin? After all, the cruel irony of the EPK is itÄôs a press release that is sent out to people that no longer review singles, to help get the vinyl into shops that no longer stock singles. In short the EPK has eaten the single. Kind of.

But wait. Although everything seems to have changed nothing has really changed has it? ItÄôs still just about people struggling to get their music heard and although the vehicle for doing this may have some nice new shiny bells and whistles and horns and Äògo fasterÄô stripes, weÄôre still swearing at 6 Music because they havenÄôt included Ultrasound, Hey Sholay or Town on their twonking play-list which is clearly ridiculous as all three singles are genius. Whatsmore, if we just sent out an EPK as a download only release weÄôd save a few pennies but it would feel like cheating. I donÄôt know why but for some reason we need something tangible to justify the releaseÄôs existence. Maybe this is too old school for cool? Maybe its about justifying our own existence, or our manufacturersÄô/distributorsÄô existence? I donÄôt know - we need Jean Paul Sartre to answer this one. But for now weÄôll keep on flying the physical flag until the day comes when our accountant takes us to one side with a copy of the latest sales statement and an EPK on his i-bone and quietly whispers into our collective ear ÄùTime to stop guysÄù (or something clever with the acronym EPKÄ¶).

Lots on in the next week at Fandango @ The Bull & Gate read below. See you down the middle,