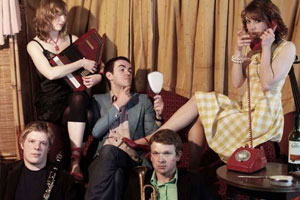 It started, as most of the best things in life tend to, with a gig. In 2001 Club Fandango crept onto the London toilet scene on a dead night (Tuesday) in a decidedly uncool venue (CamdenÄö?Ñ?¥s Dublin Castle) and carefully unfurled its glossy new backdrop. Four years down the line that dead Tuesday is a heaving maelstrom of top sexy indierock behaviour with Keane, Bloc Party, 22-20s, Death Cab For Cutie, Kaiser Chiefs, Go! Team and Arctic Monkeys all filling the venue at various points. The backdrop is looking a bit worse for wear after over 200 shows. But then again arenÄö?Ñ?¥t we all?

More than that, the Fandango empire has extended to promoting London nights at the Bull & Gate, Water Rats, Heavenly Social and Borderline, and there are plans afoot for a slew of regional Fandango shows in Blackpool, Birmingham, Nottingham, Southampton and beyond to join our monthly extravaganza at Manchester Night & Day (where Club Fandango will co-promote a four night stint through In The City 2005). Phew. So what comes next? A record company, of course.

On September 13th 2005 the makers of Pointy Records and fierce panda (your hosts for Club Fandango), are launching Label Fandango. This is a Singles Club in its purest sense, purveying thrillingly limited edition releases in black & white sleeves with the aim of breaking even and having a bit of fun with smashing new talent along the way. Pointy Records is the refuge for cosmic star chasers such as The Clientele and Flotation Toy Warning. The fierce panda recording company is the indie escape hatch for sonic terrorists such as Art Brut, Apartment, Agent Blue and other bands beginning with Äö?Ñ??AÄö?Ñ?¥. Together they are Label Fandango.

And together they have been gawping at the excesses of the corporate machine. Indie Boomtime it may be but what does that mean? ¬¨£100k marketing spends for Äö?Ñ??80s soundalikes, hysterical TV advertising campaigns for half-baked debut albums and total catastrophe if the latest over-hyped Libertines wannabesÄö?Ñ?¥ second single fails to crack the top 20, thatÄö?Ñ?¥s what. What are we doing, people? Is this really fun??

Label Fandango is the release process stripped to its fundamentals, inspired by the driving DIY dynamics of fresh-eared labels such as Transgressive, Marquis Cha Cha and Dance To The Radio. The slogan for our label is the eminently catchy Äö?Ñ??no frills: all thrillsÄö?Ñ??, because in the true orange-arsed spirit of easyjet Label Fandango is a bring-your-own-sandwiches operation with generic sleeves, a gently unhinged disposition and a genuine passion for helping bands reach somewhere else.

The first releases on Label Fandango look like this:

The Label Fandango troopers are currently considering another 67 bands for future single releases. They may be some timeÄö?Ñ¬?