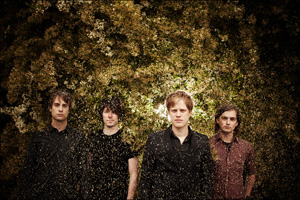 Rogue States - Some bands aspire to greatness; chasing big sounds and big ideas in an attempt to resonate. For others, it just happens. And so it is for Birmingham four piece Rogue States. The big ideas they wrestle with lyrically, like the widescreen, stadium guitars which back them, are there because the instant pop songs they set out to write got hijacked by questions and circumstance. ÄúThe songs I relate to best arenÄôt the ones that tell me how it is, but let me explore how it is,Äù says singer Michael Clarke. ÄúThatÄôs what weÄôre doing, exploring.Äù Steve Clarke (bass) and Stuart Baxter-Wilkinson (drums) first paired-up with SteveÄôs brother Michael following the demise of their successful punk-pop band Dum Dums. In 2003, going by the name Clarkesville, Michael released the critically acclaimed album The Half Chapter. They started writing together only to find themselves heading in a whole new musical direction. It would be another four years before that new direction properly morphed into Rogue States with the addition of guitarist David Wright.