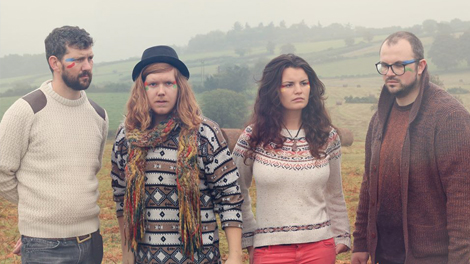 Firewoodisland draw their influences from a number of sources including artists such as Thomas Dybdahl and Bon Iver as well as from traditional folk music from Wales and Norway. With infectious vocal harmonies, marching beats, and a soundscape decorated with small organic details, they describe their sound as Celtic Viking Music.

During the sleepy autumn months of 2010 Viking descendant, Stian VedÃ¸y set sail in his longship to embark on the shores of Cardiff, South Wales. New lands and legends soon inspired him to begin his journey in a solo project.

With humble beginnings in Cardiffâs local club Koko Gorillaz the music grew in popularity, and sound to become a group of dedicated musicians who relish the chance to play together. In the past year they have travelled across the UK and even to Norway and have released their debut EP ILD which drew interest globally.

Expect uplifting tunes, joyful skipping, mesmerizing stories, enchanting anthems and an exciting fusion of unusual instruments. Creativity and artistry are the campfire they dance around.

"...they sound festival-sized, delivering uplifting anthems that would fit as comfortably on the radio as around the campfire." Q Magazine