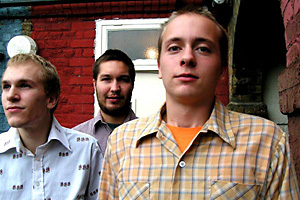 The Wave Pictures are returning to The Bull & Gate to kick off our 10th birthday celebrations! The band are David Tattersall, Franic Rozycki and Jonny 'Huddersfield' Helm. In 1998 Franic and David lived in a village called Wymeswold where they started playing music together, with Hugh J. Noble on drums. The band was called Blind Summit. When Hugh decided he didn't want to play drums he went to Exeter to study Philosophy instead. The band changed its name to The Wave Pictures. Hugh was replaced by several drummers, until Jonny 'Huddersfield' Helm became the permanent replacement. For a few years The Wave Pictures have played sporadically in the UK, France and New York. During this time highlights have included playing at the Mofo Festival in Paris at the invitation of friends Herman Dune, and playing shows with Herman Dune and The Jeffrey Lewis Band. David also sang The Wave Pictures song 'Dust Off Your Heart' with Herman Dune on a radio session for the great John Peel. The Wave Pictures have also served as backing band and co-songwriters for John Darnielle of The Mountain Goats, the results featuring on a seven-inch single released by 4AD records. Their new single 'In Her Kitchen' and album, 'Beer In The Breakers' is out now on Moshi Moshi Records.