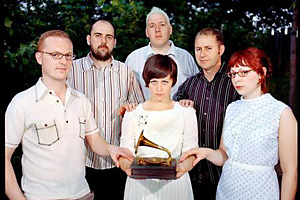 Camera Obscura have been making music for a decade, carried through the ups and downs of various line-up changes and the tender pain of daily life by the sweetly sad voice of Tracyanne Campbell. Their greatest achievement to date is arguably the critically acclaimed 2006 album 'LetÄôs Get Out Of This Country'. 'LetÄôs Get Out Of This Country' showcased the bandÄôs ability to produce quality heartfelt pop that can sail unselfconsciously through six impassioned choruses in 'Lloyd, IÄôm Ready To Be Heartbroken', alongside the stark, sweeping wails of 'Country Mile'.The album was made in Stockholm and was ably enhanced by the production magic of SwedenÄôs Jari Haapalainen, who was more than qualified to indulge the bandÄôs enthusiasm for reverb. The release of the album was supported by extensive touring through the UK, Europe, North America, Canada, Mexico, Australia, New Zealand and has seen Camera Obscura develop from a somewhat timid live proposition into a confident, dynamic and hopefully charming spectacle. Camera ObscuraÄôs back catalogue is also a haven of treasures well worth investigation, featuring along the way the talents of Belle and SebastianÄôs Richard drumming on early EP 'Park and Ride', the aforementioned Stuart MurdochÄôs production sheen on 'Eighties Fan', and the many dulcet outings of erstwhile members John Henderson and David Skirving. [CAMERA OBSCURA PLAY ROOM 1]
CAMERA OBSCURA GIGS AT CLUB FANDANGO
CAMERA OBSCURA
THE WEEK THAT WAS
THE CLIENTELE
FRIGHTENED RABBIT
THE WAVE PICTURES
LAWRENCE ARABIA
@ 229