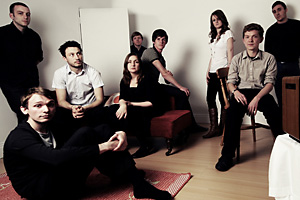 The Week That Was

The Week That Was is the new project of Field MusicÄôs Peter Brewis. For those that donÄôt know Sunderland based Field Music released two full albums, the eponymous 2005 debut and 2007Äôs 'Tones of Town', both of which became one of many peoplesÄô albums of the year. Perhaps willfully to some, Field Music, on the cusp of breaking through, decided, Äúto get off the band treadmillÄù concerned that being in a band in the traditional sense was restricting their creative output. The first fruits of this artistic freedom was David BrewisÄô much lauded School of Language album Sea From Shore in Feb 08Ä¶ the second is The Week That Was, PeterÄôs first solo foray. The Week That Was, written and recorded in late 2007 at Field MusicÄôs 8 Studio in Sunderland, emerged from an imagined crime thriller dreamt up by Peter and inspired by Paul AusterÄôs labyrinthine storytelling. Peter started writing the songs as if they were moments, instances of perspectives within this story. The story was left to fall away, leaving a puzzle of musical snapshots. Musically the record is an expansive tribute, paying direct (and indirect) homage to the wildly ambitious Linn Drum and Fairlight experiments of Kate Bush, Peter Gabriel and Tin Drum-era Japan. This fused with the typically detailed arrangements and sense of drama makes The Week That Was a brain-shattering, 32 minute epic, straying further outside the conventions of most indie-guitar music. The album was released by Memphis industries on 18th August 2008.
THE WEEK THAT WAS GIGS AT CLUB FANDANGO
THE WEEK THAT WAS
DAN MICHAELSON AND THE COASTGUARDS
THEORETICAL GIRL
@ The Borderline

Wednesday 17th June 2009 The Week That Was
Dan Michaelson And The Coastguards
Theoretical Girl @ The Borderline 07:45pm - £7.50 adv / £9 doorMemphis Industries. Three Bands Plus Go! Team And Memphis Djs In Assoc 7 Digital
CAMERA OBSCURA
THE WEEK THAT WAS
THE CLIENTELE
FRIGHTENED RABBIT
THE WAVE PICTURES
LAWRENCE ARABIA
@ 229