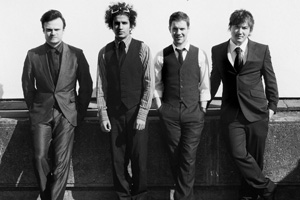 Sweet Sweet Lies hail from Brighton, England. Sweet Sweet Lies, fronted by song-writing duo Dominic VonTrapp and Michael Hayes broke into the local scene in early 2008. In one short year they have played a host of venues and festivals, including Glastonbury, The Isle Of Wight Festival, The Big Chill and The Secret Garden, and signed an album deal with Lime Records. Dominic VonTrappÄôs voice is grittily reminiscent of artists such as Tom Waits, Stephin Merritt and Johnny Cash, while Michael HayesÄô voice carries echoes of 60Äôs American singer songwriters such as such as Bob Dylan and Scott Walker. Augmented by Carter-Family southern-style guitar playing, instantly loveable choruses and solid, fluent harmonies, the five-piece act quickly emerged as one of the most promising acts in the UK. Sweet Sweet Lies are currently recording their first studio album with Lime Records at Brighton Electric. The first single from the album, Nathaniel and Bartholemew will be released in March, will the album set for release in the UK in early may, Europe in late may, and the US in early June.