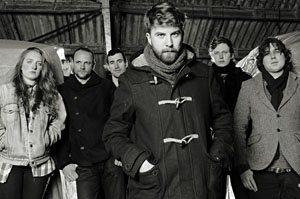 Tom Wiliiams And The Boat - 10pm
Tom Williams And The Boat follow the release of their debut album 'Too Slow' last year, with their sophomore effort 'Teenage Blood'. The 6 Music favourites release their new album on Moshi Moshi/Wire Boat Recordings in April.

Piney Gir - 9:15pm
Piney Gir taunts traditional country music with a big city edge. 'Jesus Wept' is Piney's fourth album out on Damaged Goods and is a nod to Piney's strict religious upbringing and her urge to walk the line between naughty and nice. There comes a time when everyone should question their faith and Piney (with the help of her trusty Roadshow) has channelled that into a record. A record that's a little bit country, a little bit rock 'n' roll and a whole lot of attitude.

Binko Swink - 8:30pm
Binko Swink -ÄòPlayÄô is the first release from Binko SwinkÄôs forthcoming debut album, accompanied by B-side ÄòBody NakedÄô (which one fan said sounded like Marc Bolan on a bad trip). Drawing influences from The Undertones, Elliott Smith, The Cardigans, Mazzy Star and Patti Smith, Binko Swink craft sometimes dreamy, defiant songs that demand your attention. Hypnotic drums and a bitter sweet vocal set the tone for their unique brand of pop-noir. You can tell that Binko Swink grew up in the Äò90s with Hole in the bedroom and The Beach Boys in the kitchen.