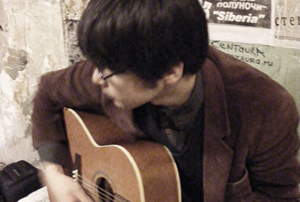 Yo Zushi has been described by Mary Anne Hobbs (Radio One) as "the spirit of Bob Dylan for the 21st Century." He has so far released two albums on Pointy Records and a limited edition cassette album on Italy's Best Kept Secret Tape Label. According to London's Metro newspaper, his "lucid tales of alcohol-fuzzled intrigue" exude "a warm melancholia"; Steve Lamacq (Radio Two) calls him a "raw, intriguing talent". Q Magazine, which gave Songs From A Dazzling Drift (2005) a **** review, compares him to a "Richard Hawley with knowing winks" and predicts that "this could be the start of something major". Dazed & Confused calls his music "a masterclass in storytelling" and The Word praises his "perfectly constructed lyricism". As his (now defunct) first band Great Days Of Sail or under his own name, Zushi has supported the likes of Joanna Newsom, Willy Mason, Scritti Politti, Rachel Unthank, Patrick Wolf and The Magic Numbers. After a two-year hiatus to work in journalism, a new album - 'Video Days' - is very close to finished.
YO ZUSHI GIGS AT CLUB FANDANGO
JIPSY
YO ZUSHI
LEYLI
AVERT FRANCIS
@ The Bull & Gate

Wednesday 2nd May 2007 Yo Zushi
Mysterious Benefactors
Tigers That Talked
The Bronsteins @ The Water Rats 07:45pm - £7 / £6 with flyer
THE CLIENTELE
YO ZUSHI
ROBERT SEKULA
@ The Spitz